As Brave As You by Jason Reynolds

As Brave As You by Jason Reynolds was published in 2016 and won The Schneider Family Book Award, The Kirkas Prize, and the Coretta Scott King Award. It deserves all three.

Goodreads blurb: Genie’s summer is full of surprises. The first is that he and his big brother, Ernie, are leaving Brooklyn for the very first time to spend the summer with their grandparents all the way in Virginia—in the COUNTRY! The second surprise comes when Genie figures out that their grandfather is blind. Thunderstruck and—being a curious kid—Genie peppers Grandpop with questions about how he covers it so well (besides wearing way cool Ray-Bans).

How does he match his clothes? Know where to walk? Cook with a gas stove? Pour a glass of sweet tea without spilling it? Genie thinks Grandpop must be the bravest guy he’s ever known, but he starts to notice that his grandfather never leaves the house—as in NEVER. And when he finds the secret room that Grandpop is always disappearing into—a room so full of songbirds and plants that it’s almost as if it’s been pulled inside-out—he begins to wonder if his grandfather is really so brave after all.

Then Ernie lets him down in the bravery department. It’s his fourteenth birthday, and, Grandpop says to become a man, you have to learn how to shoot a gun. Genie thinks that is AWESOME until he realizes Ernie has no interest in learning how to shoot. None. Nada. Dumbfounded by Ernie’s reluctance, Genie is left to wonder—is bravery and becoming a man only about proving something, or is it just as important to own up to what you won’t do? 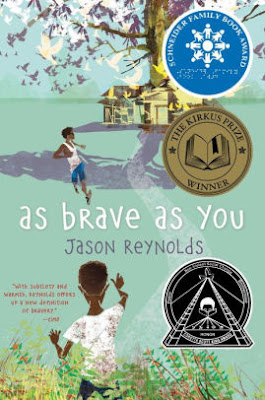 I am hoping to add a second hospital to our NICU book project, so click the link below if you are interested in donating books to babies.


Link to our NICU book registry if you'd like to donate books to babies in the newborn intensive care unit so their parents can read to them while they grow. You can also donate gently used books to our project by sending them to me or to Angie. Email me for a mailing address. We can use both English and Spanish books. If you have a graduate of the NICU, or if you have a baby whose life you would like to honor by donating books to this project, let me know, and I can make a book plate with their name for the books you donate.