Echo by Pam Munoz Ryan was published in 2015 and I found a copy of this book at one of my local Little Free Libraries.

In this novel, Ryan sets out to do a lot. The story is told in five parts, a preface, and four other parts. The preface begins in 1864, fifty years before WWI. Part one is set in Germany in 1933 as Hitler rises to power. Part two is set in Pennsylvania in 1935 where children often reside in orphanages. Part three is set in Southern California in 1942 and tells about migrant workers and Japanese interment camps. Part four is set in New York City in 1951 and has all the stories come together.

I didn't know the stories would come together and felt annoyed as each part ended because I got so attached to the characters, and I thought, "You can't just leave it like this. So when you read this, don't worry, Ryan ties it all together.

The way Ryan wove a fairy tale, a Holocaust story, a story of two orphans, a story of a migrant family, and incorporated Japanese interment camps is quite masterful. I bow down to her writing expertise. The stories are connected by a harmonica. Harmonica music is in the book, so your child can learn to play the harmonica. I listened to the audio version of this book and it was masterfully told with a different narrator for each part and included the music pieces, which was a nice touch.

Each part gives the reader the desire to learn more about the history Ryan shares. This book is part fairy tale but mostly historical fiction and is a work of art. It won a Newbery Honor in 2016, but it probably should have won the gold. 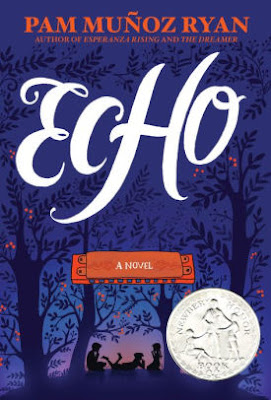