The Chosen by Chaim Potok

The Chosen by Chaim Potok was written in 1967 and is set during WWII. This book reads gently like a stream sparkling as it flows. This is a story of two boys, one the son of a Hasidic Jew and the other the son of an Orthodox Jew. One son's destiny is to be a leader like his own father, the other's father wishes him to be a professor of math.

This is a story about the influences of parents - fathers in particular, friends, education, and society. I loved Reuven's father and his gentle way of teaching. I struggled with Danny's father, but by the end, I understood his motivation for how he parented even if I didn't agree with it.

I enjoyed Danny and Reuven's friendship and even though forces outside themselves damaged their friendship, things worked out.

Quote I liked:
"His struggles are all the world sees and it naturally misunderstands them. It is hard for a free fish to understand what is happening to a hooked one." Karl A. Menninger. 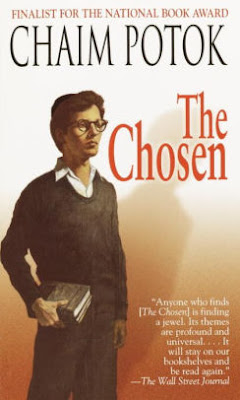 Link to our NICU book registry if you'd like to donate books to babies in the newborn intensive care unit so their parents can read to them while they grow. You can also donate gently used books to our project by sending them to me or to Angie. Email me for a mailing address. We can use both English and Spanish books. If you have a graduate of the NICU, or if you have a baby whose life you would like to honor by donating books to this project, let me know, and I can make a book plate with their name for the books you donate.
Posted by Catherine1216 at 5:00 PM