The Magic Half by Annie Barrows

The Magic Half by Annie Barrows was published in 2008 and is a great middle grade tale of magic and time travel.

Miri is sandwiched in between two sets of twins. She has older twin brothers, and younger twin sisters, so she often feels left out. Her family buys an old home, and one day when Miri has been sent to her room for hitting her brother with a shovel (he deserved it, but she shouldn't have used a shovel), she finds the single lens from a pair of glasses. She peeks through this lens and is transported to another time. She is still in her room, but a girl named Molly says it is her room and believes that Miri is a fairy who has come to save her.

Barrows got the sibling rivalry down well. Their arguments and fights are realistic. I grew up in a large family and sometimes the fights can get a bit intense. I also found the mother's reactions realistic.

There were some issues that I thought would end up being plot holes, but Barrows filled in all the gaps. There were scary parts, but not too scary for middle grade. I would have loved this book when I was in elementary school, and I'm excited to share it with Callie and Kayana. 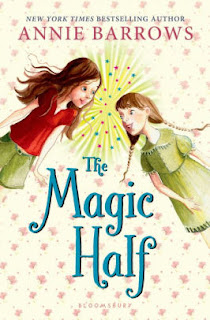