September 12th: We Knew Everything Would Be All Right

No, today is not September 12th, it is September 11th, the day our country was attacked fourteen years ago. My son in seventh grade was not yet born. I remember the day vividly, watching the news wondering how on earth a pilot could have flown a plane into the World Trade Center, brushing my teeth and getting ready for work, when we (my husband and I) watched the second plane hit, and we knew. We knew our country was under attack.

I went to work at the college and everyone was in a fog. Classes were canceled, but staff stayed because students stayed. We were glued to the televisions in the library. Firemen from next door came over to watch the televisions, and they wept when the towers came down and buried their comrades in New York. We all wept together.

The skies remained eerily silent for a few days as all planes were grounded. We wondered when the next strike would hit. We were scared and vulnerable, but the American spirit stood strong, and in the days that followed in Kennett, Missouri, a group of first graders wrote a storybook about that day and what came after.

September 12: We Knew Everything Would Be All Right is the book they wrote and illustrated. It was published in 2002, so they got it published very quickly. It is now out of print, but you can find it on Amazon for $34.00 in paperback. Hardback copies are a lot more. I was lucky to find one at a book fair the spring after the attacks, so I only paid $3.99.


This little book is quite profound as these little first graders try to make sense of the senseless. They had a teacher who helped them sort it all out and be able to more forward. Although bad things happen, the sun does come out again, and the world keeps on turning.

A New Addition to Our Family

Last year on September 11th, our family received a brand new baby granddaughter, so now September 11th has happy thoughts associated with it. We will always remember where we were fourteen years ago when we realized just how vulnerable we are, but now we will also remember the first cries of our sweet Aria. 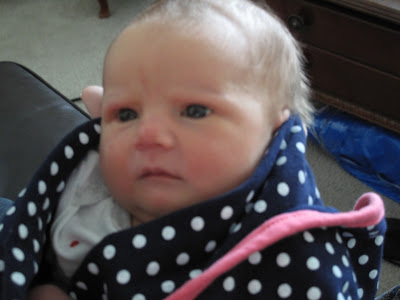 What do you remember about the attacks, and how did you find a way to stay positive in the aftermath?
Posted by Catherine1216 at 9:23 AM