Author Kathryn Reiss has degrees in German, English, and Creative Writing, and is a Fullbright Scholar. She also writes mystery well.

Her first novel, Time Windows, was published in 1991 and is still in print. In this story, Miranda and her parents have just moved into an old house, and she finds a dollhouse in the attic. When she looks through the windows of the dollhouse, she sees a little girl. What does this little girl want? What is she trying to tell Miranda?

Reiss has a way of making the hair stand up on the back of your neck. She writes a good scary story that is creepy without being over the top.

She followed up Time Windows with a sequel in 1993 called Pale Phoenix. Abby, a pale girl with ghostly hair comes to stay with Miranda and her parents. Miranda begins to hear a sad cry that seems to come form everywhere. Is it Abby or something else? I enjoyed this book, and it went well with Time Windows although I found the behavior of the parents a bit unbelievable in this story. 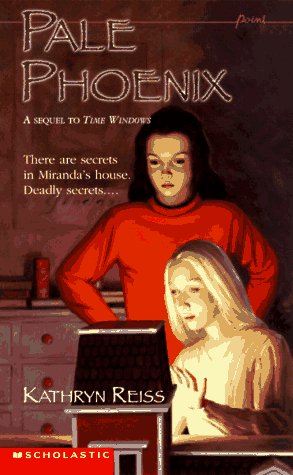 As you can see, Reiss has a large booklist of which I've only read four; however, I've enjoyed all four that I've read. Each has an element of time travel or one time touching another.

Paint by Magic, published in 2002, has Connor's mother acting strange and slipping into trances when she looks at an old art book filled with paintings of a woman that look just like her. Connor gets a chance to save his mom when he is whisked back in time to the 1920s, but can he save his mom and himself before it's too late?

In Paperquake, published in 1998, Violet, a triplet who is very different from her sisters, has always been sickly and deathly afraid of earthquakes. While helping her sisters clean a building her parents have purchased to use as a flower shop, she finds a letter, an old letter, and becomes certain it was left for her. As she finds more messages from the past, she begins to unravel a mystery, but as the earthquakes become more frequent, will she unravel the mystery in time, and if she does, will anyone believe her? I liked the character development in this story.