Bang! by Sharon G. Flake was published in 2005. This story follows Mann, who is thirteen years-old. He and his family are dealing with the shooting death of his little brother, Jason. Being shot to death is a common occurrence in Mann's neighborhood.

Although I have not experienced the things that Mann and his family have experienced, there are  young readers who have experienced this. Mann's family isn't dealing well with Jason's death. His father is pushing Mann to be a man before he is ready and his mother who has stopped eating tries to keep Jason's memory alive by acting as if he is still alive.

Mann is hanging out with a friend who is leading him down the wrong path, but that isn't as bad as what he father does to try to make him grow up.

I wanted to strangle Mann's father, but Sharon Flake does a superb job of helping me see where his father's head is. I loved the conclusion and the growth of the characters. I was  confused on what happened to the caretakers or owners of the horses and wish that had been answered. I loved the conflict and the contrast between the city and the country and how the country also had dangers.

I wanted people to be nicer, but I know that often they are not. I wanted to see the artwork of Mann and his friend Kee-lee. I wanted to wrap my arms around all the characters and put them in a safe place. I liked that even though Jason was killed at the beginning of the book, he was still very present in the story.

Sharon G. Flake is a good storyteller. You will laugh and cry. You will be angry at her characters. You will want to shake them and protect them. Her stories will make you squirm and they may make you feel uncomfortable, but she addresses some hard topics and writes books that need to be in classrooms.

We are currently in dire need of Spanish books. There have been a lot of Spanish speaking families who have had babies in the NICU recently, and we are completely out of books for them.

I found this stack of three board books on my front porch this morning. Thank you to whomever left it for the babies. 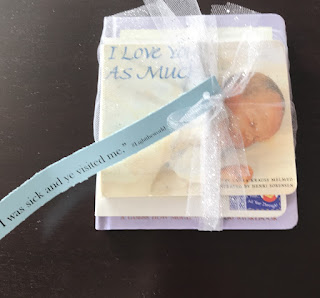 Michelle and I went shopping on Saturday and we found some books. Here are the books Michelle found. Thank you, Michelle. 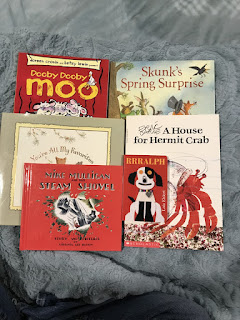