I listened to the audio version of Defending Jacob by William Landay and couldn't stop listening. Published in 2012, this thriller will have you listening or turning pages until the story is over. I wanted more at the end. I wanted to know what would happen to the players long into the future, but it was still a good stopping place.

Goodreads blurb: Andy Barber has been an assistant district attorney in his suburban Massachusetts county for more than twenty years. He is respected in his community, tenacious in the courtroom, and happy at home with his wife, Laurie, and son, Jacob. But when a shocking crime shatters their New England town, Andy is blindsided by what happens next: His fourteen-year-old son is charged with the murder of a fellow student. Every parental instinct Andy has rallies to protect his boy. Jacob insists that he is innocent, and Andy believes him. Andy must. He's his father. But as damning facts and shocking revelations surface, as a marriage threatens to crumble and the trial intensifies, as the crisis reveals how little a father knows about his son, Andy will face a trial of his own - between loyalty and justice, between truth and allegation, between a past he's tried to bury and a future he cannot conceive.

This book had me questioning: How much do I really know about my own child? At what lengths would I go to protect my child if I believed they were innocent of a crime? What is my responsibility if I think they are guilty?

I found myself putting myself in the role as Jacob's parents. Wondering about his innocence or guilt, feeling the guilt they must have felt, wondering if they were doing the right thing, wondering what they had done or not done to make Jacob's life better. This is definitely a well written page turner. 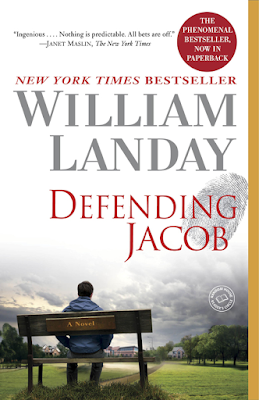 Another way to help our project is to purchase books from this Usborne link as we are currently using the hostess benefits to help buy books for the babies. You buy books that are delivered to your house for your children or grandchildren - or as baby shower gifts, and the hostess rewards help us get books for our NICU babies - a win win for all.