Once We Were Brothers by Ronald H Balson

Once We Were Brothers by Ronald H Balson was published in 2010. This book is historical fiction set during WWII and into modern day.

The story begins with Ben Solomon accosting Elliot Rosenzweig at a social event and threatening to shoot him. Ben accuses Elliot of being a Nazi SS Officer during WWII and of committing war crimes. However, Elliot has a tattoo from being a prisoner at Auschwitz, and the mystery begins. Ben believes Elliot was named Otto Piatek, and believes he recognizes him as the foster brother who was taken in by his parents during the depression in Germany, so they were raised as brothers.

Solomon convinces an attorney to help him bring Otto Piatek to justice. The story grabbed me right in and although the time shifts from present to past to present again, it is well written and compelling. I could see how this story could have come to pass even though it is fiction. I won't tell you if Ben is correct or not, but Balson makes his reader think. 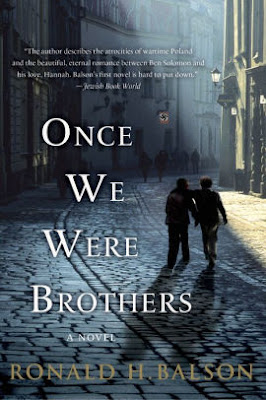