The Martian by Andy Weir

I'm late to the party as usual, but I finally read The Martian by Andy Weir. Published in 2011 as an ebook and in 2014 in hardback and paperback, this book was quickly made into a movie.

I review a lot of books for children and young teens, but this book is for adults as it has adult language right up front in the opening sentence. As I've said before, I'm fine with adult language as long as it's not gratuitous. The language in this book fits the situations.

A giant dust storm on Mars forces the crew to evacuate, and astronaut Mark Watney doesn't make it to the escape pod before it leaves the surface of the planet. His crew watched him get hit by equipment and tumble out of sight. All the data from his suit says he is dead, but Mark is alive.

He's alone on Mars with not enough food or water to survive until another launch brings a new Mar's crew. He will have to use his own ingenuity, determination, and intelligence to keep himself alive. This book combines science with a great story to keep the reader turning pages.

I haven't watched the movie but knew that they cast Matt Damien for the title role and heard the narration of his voice in my head. I can see why they cast him. If you watched the movie, what did you think? Was it as good as the book? Should I take the time to watch it? 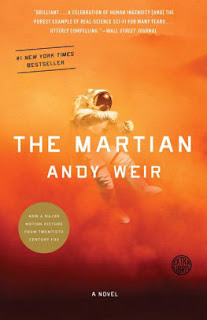 Link to our NICU book registry if you'd like to donate books to babies in the newborn intensive care unit so their parents can read to them while they grow. You can also donate gently used books to our project by sending them to me or to Angie. Email me for a mailing address. We can use both English and Spanish books. If you have a graduate of the NICU, or if you have a baby whose life you would like to honor by donating books to this project, let me know, and I can make a book plate with their name for the books you donate.
Posted by Catherine1216 at 3:24 PM