Born a Crime by Trevor Noah

Born a Crime by Trevor Noah was published in 2016. My niece, Emily, recommended this book to me, and I loved it. I found laugh out loud funny but also tear inducing. He tells about his childhood in South Africa. The writing is good. As someone who had an unusual childhood, I could relate to some of his childhood.

Trevor Noah was child who did not feel guilt even when he did something wrong. My childhood was spent feeling huge amounts of guilt. I've been writing my own memoir, and my daughter who is proofreading it said, "You had so much guilt for such a young child." Yes, I felt guilt for everything - if it was my fault or not did not matter.

"Imagine being thrown out of an airplane. You hit the ground and break all your bones, you go to the hospital and you heal and you move on and finally put the whole thing behind you - and then one day somebody tells you about parachutes. That's how I felt" (31).

"In America the dream is to make it out of the ghetto. In Soweto, because there was no leaving the ghetto, the dream was to transform the ghetto" (40).

"My mother calls it 'the black tax.' Because the generations who came before you have been pillaged, rather than being free to use your skills and education to move forward, you lose everything just trying to bring everyone behind you back up to zero" (66).

"'Because,' she would say, even if he never leaves the ghetto, he will know that the ghetto is not the world. If that is all I accomplish, I've done enough" (74).

"The first thing I learned about having money was that it gives you choices. People don't want to be rich. They was to be able to choose. The richer you are, the more choices you have. That is the freedom of money" (188).

"People love to say, 'Give a man a fish, and he'll eat for a day. Teach a man to fish, and he'll eat for a lifetime.' What they don't say is, 'And it would be nice if you gave him a fishing rod.' That's the part of the analogy that's missing. Working with Andrew was the first time in my life I realized you need someone from the privileged world to come to you and say, 'Okay here's what you need, and here's how it works" (190).

"The hood was strangely comforting, but comfort can be dangerous. Comfort provides a floor but also a ceiling" (219).

"Growing up in a home of abuse, you struggle with the notion that you can love a person you hate, or hate a person you love. It's a strange feeling. You want to live in a world where someone is good or bad, where you either hate them or love them, but that's not how people are" (267).

I loved how hard his mom fought for Trevor to have a better life. I would love to have her write her life story. She is quite the woman.

Thanks for the recommendation, Emily. 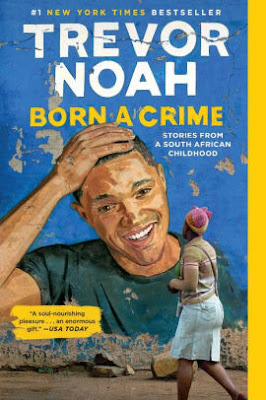