The Little Lame Prince by Dinah Maria Mulock was first published in 1874. I enjoy reading books that were published long ago as they show our progression as people.

I found an illustrated edition of this story published in 1948. This book includes several fairy tales that were written by Miss Mulock.

The title story is about a prince who was dropped as an infant causing his legs to be useless. He is placed in a tower with a nurse and is supposed to stay there for life as his wicked uncle has usurped his throne. His godmother comes and gifts him with a cloak that he uses to travel the world.

This was the best of the stories in the book, but all of them have value. As with much of the literature that was published for children during this time period, there is a moral or lesson to each story.

Children and animals were often treated harshly and violence is included in the stories. I liked The Adventures of a Brownie and would have been delighted with his story as a child.

Some of the illustrations of this edition are a bit creepy, but overall, this is a fun book.

Stories included in this edition: The Little Lame Prince, The Adventures of a Brownie, The Prince with the Nose, Prince Cherry, and The Invisible Prince.

This book is still in print only with a different cover. 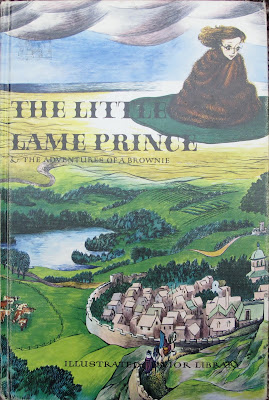 Link to our NICU book registry if you'd like to donate books to babies in the newborn intensive care unit. We give each parent a packet of five books that they get to keep to read to their baby while they are in the hospital and later at home.