The Fountainhead by Ayn Rand was published in 1943. I listened to the audio version which was narrated by the amazing Christopher Hurt.

This 679 page saga follows Howard Roarke after his expulsion from architect school. Howard Roarke is a man who stands up for what he believes in. He is expelled from school because he wants to take architecture into the future instead of designing things that look like the past. The story is set from the 1920s into the late 1930s.

Roarke goes to work for his idol and learns that business is hard for those who refuse to change their belief system. He struggles to support himself because he won't alter his designs to suit public opinion. The story also follows Roarke's classmate Peter Keating, a man with looks and charm but little talent as an architect.

This story shows how public opinion can make or break a career. With Keating soaring to the top and Roarke falling even though Roarke has more talent.

Roarke is generally a good hero. He is strong, works hard, sticks to his principles, with the exception of Rand writing him completely out of character and having him commit rape. As a reader, when a writer does something that a character would not do, I just disregard it. The rape makes sense in fueling Dominique's anger, but her anger doesn't really seem like anger, so I'll disregard it.

There are many parts of the story that made me want to be a better person. To write without worrying about what my readers will think. To create my own art without worrying about public opinion. Dominique was one messed up woman and I struggled to understand her. I liked the changes in Gail Wynand and found Tooehy a worm of a man.

Well worth the listen or the read. 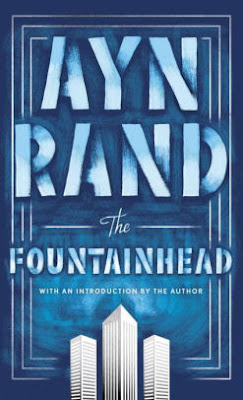