Bad News for Outlaws: The Remarkable Life of Bass Reeves, Deputy U.S. Marshal by Vaunda Micheaux Nelson and illustrated by R. Gregory Christie was published in 2009 and won the Coretta Scott King award. I am a sucker for books about people, places, or things I've never heard of, and because this is a picture book with amazing pictures, it came home with me.

The subtitle of this book is: The Remarkable Life of Bass Reeves, Deputy U.S. Marshal. I'd never heard of him. He was a Black Deputy U.S Marshal during a time when many white people did not like the idea of Black Americans being anything other than servants or slaves.

Bass Reeves was a slave. He escaped his owner (that is so awful for a human to be owned) during the Civil War and hid in Indian Territory. He was accepted by some of the tribes. After the Civil War, he and his wife moved to Arkansas just outside Indian Territory and had eleven children.

Squatters and other outlaws went into Indian Territory even though it was illegal for them to be there. They wanted government protection even though they were breaking the law. Bass Reeves became a deputy for Judge Isaac C Parker, and Reeves never failed to get his man.

Reeves was taller and stronger than the average man. He was a crack shot with a gun, so much so that he was banned from entering contests at fairs and picnics. He always tried to capture the fugitives he hunted alive. He was incredibly intelligent and found ways to capture fugitives without injury to himself or others. In the course of hunting down and arresting over 3,000 fugitives, he killed only fourteen men in the line of duty, and those because they gave him no choice but to use deadly force. Some fugitives turned themselves in rather than face him when they found out he had their warrant because he always got his man.

The art in this book is wonderful. Christie does well to capture emotion and mood in his art.

This is a great book for any elementary school child who is looking for someone to do a biography on. Nelson includes a photograph of Reeves, vocabulary of western words students may be unfamiliar with, a timeline of Reeves' life, websites to conduct more research, more information about Judge Isaac C Parker and Indian Territory, and a bibliography. All of these things make this an excellent book for the classroom and for home use. 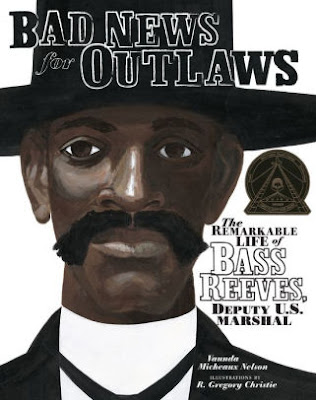 Link to our NICU book registry if you'd like to donate books to babies in the newborn intensive care unit so their parents can read to them while they grow. You can also donate gently used books to our project by sending them to me or to Angie. Email me for a mailing address. We can use both English and Spanish books. If you have a graduate of the NICU, or if you have a baby whose life you would like to honor by donating books to this project, let me know, and I can make a book plate with their name for the books you donate.
Posted by Catherine1216 at 10:16 AM