I found this story charming, funny, dark, sad, and wonderful. I love the relationships between Celeste, Jane, and Madeline. I also like how different the relationships are between Madeline and her husband and Celeste and hers. Madeline's ex lives in her town, and his child will start kindergarten with her own little girl, so there is a lot of awkwardness.

There is plenty of conflict in this book. Moriarty shows the often complicated dynamic involved in blended families, with victims of abuse, and trying to parent teens. Moriarty also creates characters that come right off the page. These people, from the youngest to the oldest are well developed. If you want to know how to write characters well, read her writing. She knows her stuff. She writes some of the best children characters.

I was kept guessing until the big reveal at the end even though I had made several guesses. I stayed up way too late to read the ending because I just had to know who did it before I went to bed. 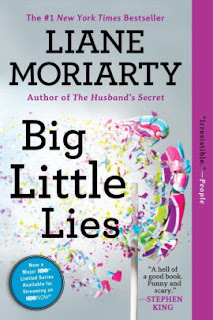 Link to our NICU book registry if you'd like to donate books to babies in the newborn intensive care unit so their parents can read to them while they grow. You can also donate gently used books to our project by sending them to me or to Angie. Email me for a mailing address. We can use both English and Spanish books. If you have a graduate of the NICU, or if you have a baby whose life you would like to honor by donating books to this project, let me know, and I can make a book plate with their name for the books you donate.
Posted by Catherine1216 at 11:12 AM