Rena's Promise: A Story of Sisters in Auschwitz by Rena Kornreich Gelissen with Heather Dune Macadam

Rena's Promise: A Story of Sisters in Auschwitz by Rena Kornreich Gelissen with Heather Dune Macadam was published in 1995 and republished with an expanded edition in 2015. This book is incredibly well written.

This is the story of Rena and her little sister, Danka. Rena was on the first transport of women to be sent to Auschwitz, and her sister joined her later. This story shows the resilience of the human spirit to survive against insane odds. How anyone survived what they went through astonishes me.

Rena's story, like other Holocaust memoirs, makes me wonder how human beings can be so cruel to other human beings.

Some quotes I liked:

"The heart is only so big, so I do not hate. To hate is let Hitler win" (preface xi).

"They asked me how I got over Auschwitz, and I said, 'I had babies'" (preface xv).

"The air is cooler up her, but the sun is strong and the wind, though it has a nip of winter, has none of its cruelty" (2).

'"I just want my children to read my story someday,' she says. 'I can't tell it to them. I tried, but it's too hard.' And that first day I know that if nothing else I will do that for her - she deserves that much" (3).

I found this book hard to put down. 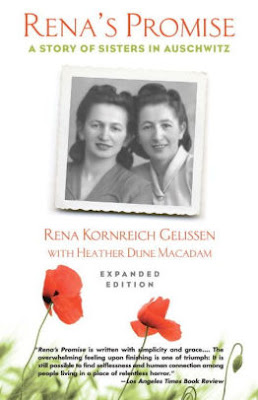 Link to our NICU book registry if you'd like to donate books to babies in the newborn intensive care unit so their parents can read to them while they grow. You can also donate gently used books to our project by sending them to me or to Angie. Email me for a mailing address. We can use both English and Spanish books. If you have a graduate of the NICU, or if you have a baby whose life you would like to honor by donating books to this project, let me know, and I can make a book plate with their name for the books you donate.
Posted by Catherine1216 at 12:23 PM