Salt to the Sea by Ruta Sepetys

Salt to the Sea by Ruta Sepetys was published in 2016 and is about a piece of history I'd not learned about before. Sepetys takes important but not as well know pieces of history and creates beautiful historical fiction.

From Goodreads: "While the Titanic and Lusitania are both well-documented disasters, the single greatest tragedy in maritime history is the little-known January 30, 1945 sinking in the Baltic Sea by a Soviet submarine of the Wilhelm Gustloff, a German cruise liner that was supposed to ferry wartime personnel and refugees to safety from the advancing Red Army. The ship was overcrowded with more than 10,500 passengers — the intended capacity was approximately 1,800 — and more than 9,000 people, including 5,000 children, lost their lives."

Blurb from the back of the book: "Each one born of a different homeland' each one hunted, and haunted, by tragedy, lies, war. As thousands desperately flock to the coast in the midst of a Soviet advance, four paths converge, vying for passage aboard the Wilhelm Gustloff, a ship that promises safety and freedom.

"But not all promises can be kept."

This story is told from the point of view of four different characters and each chapter lets you know whose point of view is being told. All four people meet and have a connection. This story is important. It shows the plight of the refugees and the damage war causes in the lives of all.

I listened to the audio version and it was well narrated. 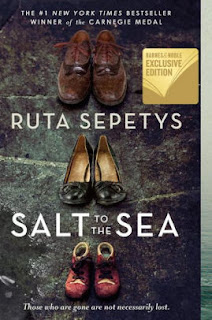 Link to our NICU book registry if you'd like to donate books to babies in the newborn intensive care unit so their parents can read to them while they grow. You can also donate gently used books to our project by sending them to me or to Angie. Email me for a mailing address. We can use both English and Spanish books. If you have a graduate of the NICU, or if you have a baby whose life you would like to honor by donating books to this project, let me know, and I can make a book plate with their name for the books you donate.
Posted by Catherine1216 at 10:46 AM