Frog on a Log? by Kes Gray and Jim Field

Frog on a Log? by Kes Gray and Jim Field is a story that has a lot of fun with rhyme. Let me show you a few pages. 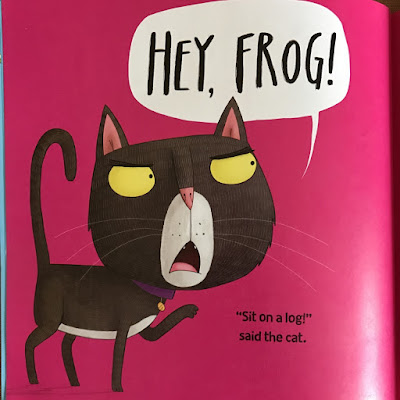 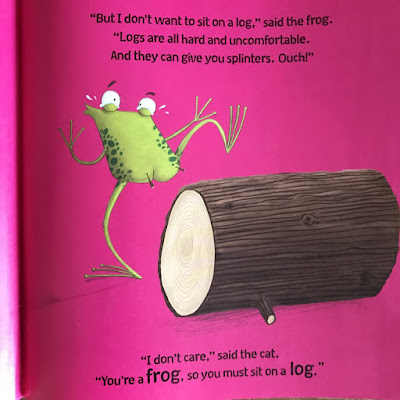 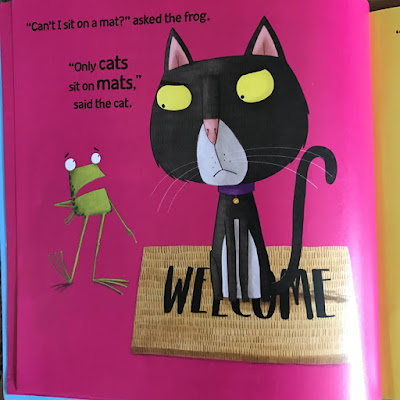 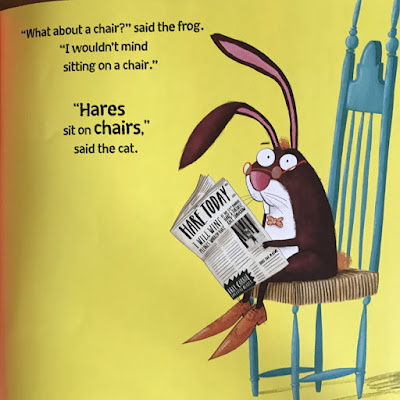 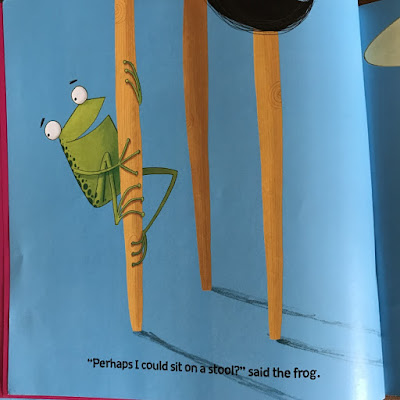 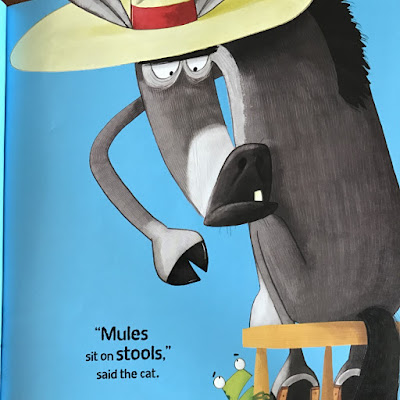 This book has a cute ending and can start you playing the rhyming game with your child. A couple of the animals don't exactly rhyme with where they sit, but the author is from Great Britain so accents must be taken in to account.

Read to a child today even if that child is you.
Posted by Catherine1216 at 9:00 AM No comments:

The Lamb-a-roo by Diana Kimpton

The Lamb-a-roo written by Diana Kimpton and Illustrated by Rosalind Bearshaw was published in 2006 and is a story of adoption. Kimpton is an adoptive parent who adopted a brown eyed child who longed to have eyes like the rest of her family.

In Lamb-a-roo, a lamb is adopted by a kangaroo. The mother and baby lamb love each other very much, but the lamb wants so badly to be more like a kangaroo. He does everything he can think of to become more like his mother.

He finds some bed springs and is excited to finally be able to jump, but if he is more like a kangaroo, he is less like himself - his own true perfect self.

This beautifully illustrated story is about accepting and appreciating differences and about learning that you don't have to be like someone in order to love them completely.

Unfortunately this book is out of print, but it can still be found at reasonable prices online.

Read to a child today to help them see that they are not so different after all and that different can be a good thing.
Posted by Catherine1216 at 9:05 AM No comments:

What do you do if your house in the woods is going to be cleared to make way for another plastic tree factory? Why you do what the animals do in Dinosaur Woods by George McClements. Published in 2009, this story values the lives of animals and of saving natural habitat.

When the animals find out they are going to lose their home, they try to get people to listen to them, but no one does, so they decide that people won't destroy the woods if they think a dinosaur lives there. They work together to build a robotic dinosaur and climb inside to operate it in hopes of scaring the construction crews away. 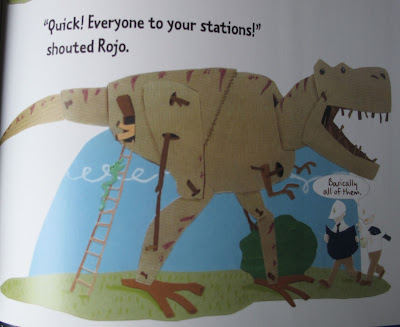 This book is great for kids of all ages. The pictures are fun and cute and there is enough going on to make it fun for an older child as well as any child who loves animals.

The animals are able to save their homes but not in the way they intended.

Read to a child today in order to build their background knowledge.
Posted by Catherine1216 at 2:10 PM No comments:

When I was book shopping for my grandchildren for Christmas, I noticed that Mary Downing Hahn had a new book. Took: A Ghost Story is classic Hahn. She gives the reader the creeps in a good way. This story has it all: a witch or two, folklore, a creepy doll, time travel, a beast, a haunted child, and an old house.

Blurb from Goodreads: “Folks say Old Auntie takes a girl and keeps her fifty years—then lets her go and takes another one.”     Thirteen-year-old Daniel Anderson doesn’t believe Brody Mason’s crazy stories about the ghost witch who lives up on Brewster’s Hill with Bloody Bones, her man-eating razorback hog. He figures Brody’s probably just trying to scare him since he’s the new kid . . . a “stuck-up snot” from Connecticut. But Daniel’s seven-year-old sister Erica has become more and more withdrawn, talking to her lookalike doll. When she disappears into the woods one day, he knows something is terribly wrong. Did the witch strike? Has Erica been “took”?

If you like Mary Downing Hahn or Betty Ren Wright, you will enjoy this story.

Read to a child today even if that child is you.
Posted by Catherine1216 at 10:49 AM No comments:

In Dear Mr. Henshaw, Beverly Cleary gets what it is like to be a child of divorce when your dad doesn't take any interest in you. I could relate to Leigh Botts and how he felt forgotten.

I enjoyed Leigh's writing process and how he became less dependent on Mr. Henshaw for feedback as he began to write in a journal. This Newbery winner was published in 1983, yet it is still relevant to today's students.

This book would work well with a writing unit to help students be more original writers instead of trying to copy what someone else is doing. This book shows the importance of voice and of expanding our reading lists.

The Prince and the Pauper by Mark Twain

For those who have ever wanted to switch places with someone from a different lifestyle, The Prince and the Pauper by Mark Twain is a warning of the dangers of doing so and the knowledge that can be gained when we walk a mile in the shoes of another.

I listened to this book on Librivox as read by John Greenman. He is a good narrator.

Read to a child today or let LibriVox do so for you.
Posted by Catherine1216 at 8:59 AM No comments:

Parallel Journeys is the story of Helen Waterford, a Jewish survivor of the Holocaust and Alfons Heck, a high ranking Hitler Youth. They didn't meet during the WWII, but after the war they meet and spoke out against what happened during the Holocaust.

This was the first memoir I've read that tells the story from the perspective of a person who participated with exuberance in Hitler's plan to destroy an entire race. I found Alfons Heck's honesty haunting and courageous. He details how Hitler trained the youth of Germany to hate Jews and to embrace Germany as the master race that would control the world. The brainwashing of the children was methodical and well planned. Heck was able to realize that he too was a victim of Hitler's evil.

Eleanor Ayer's husband died in the death camps and she nearly died. They sent their young daughter into hiding, and she survived, but after being away from her parents for three years, she had a hard time adjusting to her mother. So much was stolen from Ayer.

I enjoyed reading about their speaking tours and how some people were angry with Ayer because she sat alongside a member of the Hitler Youth - one that had fought and killed allied troops. I appreciated her ability to forgive and to understand the he too was a victim.

Heck said, ""When I speak to young people, the message I hope that they most remember is this: the murder of eleven million people in the Holocaust began very simply with prejudice, minor harassment. If you allow harassment to grow and fester, if you do nothing to stop it, then you become one of the perpetrators. What began in the Hitler years as minor harassment turned, in the end, to genocide" (226).

This is an important book that was written for readers over age ten and shows the importance of kindness and fighting against bigotry of any kind.

Wintergirls by Laurie Halse Anderson is about two girls who suffer from Anorexia. One of them dies at the start of the story, and the other, Lia, is left to fight the battle.

Published in 2009, this book is up to date and hard hitting as many of Anderson's books are. The reader gets to experience Lia's downfall as she tries to deal with her own eating and cutting disorders along with her guilt over Cassie's death.

Although I felt the book had some pacing issues, I enjoyed the story and all the poetic words that bothered some other reviewers. I like language that helps me visualize the story, and Anderson is very good at making the reader see the story. I also liked her use of strike-out formatting. I felt it worked for the character and the intended audience.

I felt for Lia's parents. I found myself asking, "What would I do in their shoes?" How do you help a child when you don't understand what they are feeling, when they won't do the work needed to get well, when your insurance won't cover treatment?

I liked the growth in Lia's character and how realistic she seemed in her relationships with everyone around her. Nothing felt contrived - only brutally real. Her stepmom was wonderful, real, not the evil stepmother archetype, but instead a woman of great compassion who was frustrated and trying to protect her own child.

I love the cover art of this novel.

Read to a child today even if that child is you.
Posted by Catherine1216 at 12:10 PM No comments:

2016 Gifts to the NICU Book Project

Check this out: Carolyn Rich-Denson donated 68 brand new books to our NICU book project. Sixty of the books are board books which are so valuable for little hands. Babies need to touch and turn pages without worrying about harming the books. Thank you Carolyn. I always run out of board books, so your donation will help build a lot of packets. 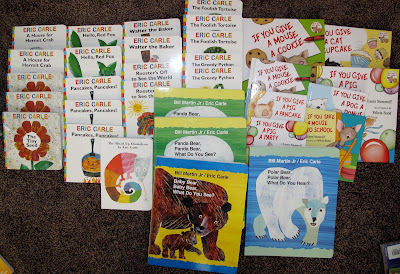 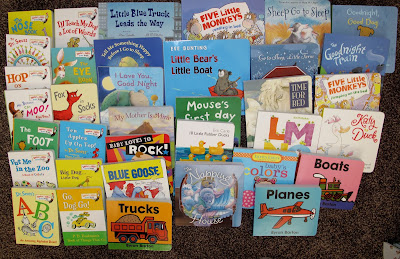 My friend, Michelle, has been beyond generous to our book project. Look at all the fun books she found for the babies - 39 more books of all types. I appreciate her consistent support of this project. She donated 365 books to our project last year - one for each day of the year. 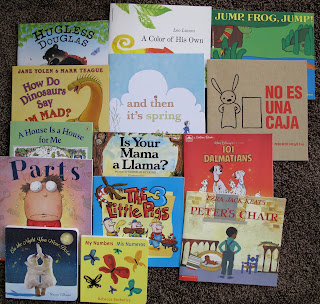 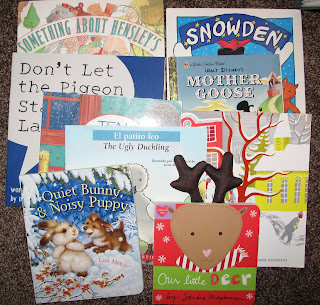 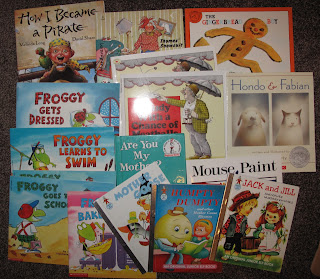 Because of donations like these and from other people who have donated books this year, we were able to continue this project in a bigger way than I could ever do on my own. Thank you all for your support.

Thanks to each of you who made this possible.

Email me if you'd like to know how to contribute to our NICU project as we are always looking for good quality books for infants and toddlers for this project.

Edited to add: Here is a link to a book registry at Amazon where you can purchase books that will be shipped to us for the babies. Book Registry at Amazon for NICU
Posted by Catherine1216 at 10:28 AM No comments:

The Odyssey by Homer

Greek mythology contains illicit love affairs, violence, and mayhem, and Homer's depiction will keep you reading or listening. I wanted to flay the suitors and make them go away. I loved how faithful Penelope remains to Odysseus. I loved the trickery of the gods and how the story ends.

Don't be afraid of a 1200 year-old text. It is an understandable and wonderful adventure. 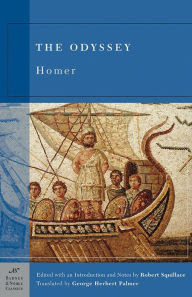 Read an old book today and see if it can become a new friend.
Posted by Catherine1216 at 1:57 PM No comments: