That Ranger's Apprentice was not a series I ever would have picked up on my own. I mean, look at it: 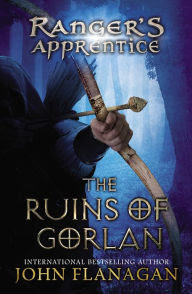 I wasn't sure what to expect, but it looked like a boy's fighting adventure. However, I have a rule that every book in my classroom has to be read by me before it gets placed on the shelf. This way I know which books to recommend to which students.

One of my students asked, "If I donate the first five books of this series, will you read them?"

Of course, my answer was, "Yes, in fact if you donate them, they go to the top of my "to read next" pile.

I finished the first four in less than a week. My student was still reading book five, so I bought my own copy because I just had to know what was going to happen next.

John Flanagan ended the series twice, but because his fans wanted more, he wrote more until he finished the twelfth book. I have the entire series and have read them all.

Why is is this such a good series? First of all, the characters are people you'd want to have as friends. They seem real. They have faults and strengths. They mess up sometimes, but they do their best to be good people. The girls and women in this series are strong, smart, and brave. They also seem like real people.

This series shows kids (and adults who love YA) that we are all different, and it is okay to be different. Flanagan shows that the world needs different types of people to accomplish different tasks.

In the beginning of the book, Will (the main character) wants to be apprenticed into Battleschool. His father was a fighter, and he wants to be a hero like his father was, but Will is small and slight, and they don't want him. Will is crushed when he is told that he is not suited for Battleschool.

However, Will has the qualities of a Ranger. He can climb and move silently without being seen, so a whole new world opens up to him.

Will finds his place and makes friends along the way. Flanagan makes the reader care about the characters. There is a lot of action, swords, a bit of magic, bows and arrows, adventure, danger, battle scenes, and as the series progresses, there is a little romance.

Read the first one, and you too may end up reading the entire series.