I started collecting books in 2014 for the NICU where my daughter works to honor the lives of my own twins and also of two grandchildren who did not survive pregnancy. It took me a year to gather 150 books sorted into packets of 5 books each. I delivered them in September of 2015. I had only planned on making this one donation, but the books were so needed by the parents, that I kept on gathering books.

Other people started donating books so we could attempt to make sure every baby went home with a packet of books. Parents read these books during their often lengthy stays, helping their baby's brains and creating bonding moments full of love.

In 2017, we had over 30 donors to our project. Some chose to donate anonymously, and many people donated to honor the memory of one of our NICU babies, Liam Heintz. We collected a total of 1,618 books. This means that 323 babies will be read to in the NICU and will go home with their very first collection of books.

Thank you to the following people and to those who donated anonymously.
I thank each and every one you. I know that reading to babies makes a difference in their educational future. When the packages of books began arriving to honor Liam, I cried for the love that was sent to honor his life. Each book that is donated means so much to me and to what began as a small gesture to honor my own babies. Our project has grown a lot. Now nearly every baby in my daughter's NICU receives a packet of books. I hope that in 2018, every single baby will receive books before they go home.

Here are pictures of our last two donations of 2017. Breitling Corts's mom and Brandon and Cayli heard that we were in desperate need of Spanish books, so they came to the rescue.


Breitling is one Angie's scouts. He was so kind to bring these bilingual Spanish and English books for the NICU babies. 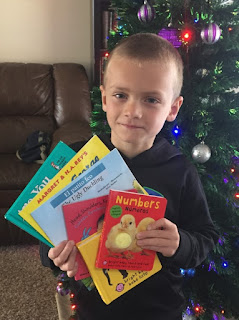 Here are the bilingual books that Brandon and Cayli brought over. It is so important for children to be read to in their first language. Thank you, Brandon, Cayli, and Breitling for helping make this possible. 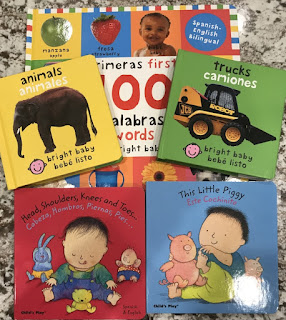