Fireflies in the Dark: The Story of Friedl Dicker-Brandeis and the Children of Terezin by Susan Goldman Rubin

She had been given an opportunity to escape but couldn't bear to leave her husband and family, so she stayed. When packing for Terezin, she filled her suitcases with art and drama supplies and used these supplies to help the children of Terezin. She organized plays for the people to view and to perform in. She hid thousands of their drawings, paintings, and artworks. These are now on display in many museums.

Friedl Dicker-Brandeis did not survive the war. She was sent to Auschwitz-Birkenau in October of 1944 with 30 of her students and they all were killed. Her husband survived.

Friedl Dicker- Brandeis was a hero and a light in a horribly dark place. She did all she could to ease the suffering of the people of Terezin. She was an amazing artist, but did not do much art while in Terezin as she wanted to save the supplies for the children. The book includes pictures of some of the artwork and it is pretty haunting, especially when you see that most of the artwork was done by children younger than 12 and most of them were murdered by October of 1944.

"I turned out more courageous then I had supposed." (12) ~ Friedl Dicker-Brandis (May I live by this quote even though I am somewhat of a coward.)

A poem by 11 year-old Ivo Leo Katz who died at age 12:
"Some day we shall outrun this hour,
Some day there will be comfort for us,
And hope again burst into flower,
And peace and guardian care restore us.
The jug of tears will break and spill,
And death be ordered: 'Hush, be still!'" (43).

When  I think of the talent, the intelligence, the humanity of those who were murdered by the Nazis, I am saddened to the core. What might they have done, become, or their children become? How much knowledge, advancement of humanity was lost in the death camps? 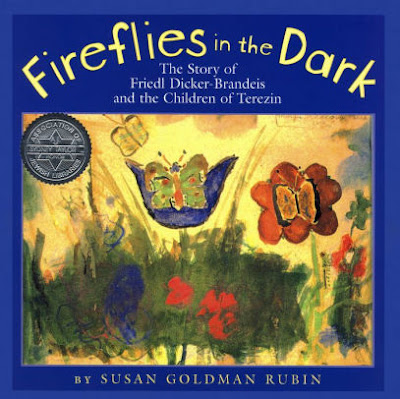