Back before Neil Gaiman and Terry Pratchett became household names - if your have a reading household - they wrote a book together. This book is Good Omens and was published in 1990. The subtitle is: The Nice and Accurate Prophecies of Agnes Nutter, Witch.

Blurb from the back of the book: The world will end on Saturday. Next Saturday. Just before dinner, according to the The Nice and Accurate Prophecies of Agnes Nutter, Witch, the world's only completely accurate book of prophecies written in 1655. The armies of Good and Evil are amassing and everything appears to be going according to Divine Plan. Except that a somewhat fussy angel and fast-living demon are not actually looking forward to the coming Rapture. And someone seems to have misplace the Antichrist.

The book begins in the Garden of Eden were the reader meets the demon/snake Crawly and the angel Aziraphale, and we learn what has become of Adam and Eve. After a page or two, we are taken to a time eleven years from present day, and then to present day in the last week before the Apocalypse.

This book is funny. It is irreverent and laugh out loud funny. It is also thought provoking with well written characters.

"But he liked seeing nuns around, in the same way he liked seeing the Salvation Army. It made you feel that it was all right, that people somewhere were keeping the world on its axis" (21).

"People couldn't become truly holey, he said, unless they also had the opportunity to be definitively wicked" (34).

"Where you found the real McCoy, the real grace, and the real heart-stopping evil, was right inside the human mind" (77).

'"You see, evil always contains the seeds of its own destruction,' said the angel" (87).

"Adam grinned. Notoriety wasn't as good as fame, but was heaps better than obscurity" (129).

"Perhaps they saw what their minds were instructed to see, because the human brain is not equipped to see War, Famine, Pollution, and Death when they don't want to be seen, and has got so good at not seeing that it often manages not to see them even when they abound on every side" (313).

'"We were only doing our jobs,' muttered Crowley. 'Yes, so what? Lots of people in history have only done their jobs and look at the trouble they caused'" (341). 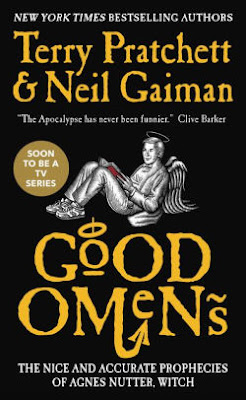 My copy has a drawing of Crowley the demon. I look forward to reading this book again.


Read to a child today even if that child is you.

Link to our NICU book registry if you'd like to donate books to babies in the newborn intensive care unit so their parents can read to them while they grow. You can also donate gently used books to our project by sending them to me or to Angie. Email me for a mailing address. We can use both English and Spanish books. If you have a graduate of the NICU, or if you have a baby whose life you would like to honor by donating books to this project, let me know, and I can make a book plate with their name for the books you donate.
Posted by Catherine1216 at 10:53 AM