Are you ever afraid to pick up a book with a dog on the cover? If you've read Where the Red Fern Grows, Old Yellow, or Love That Dog, you know what happens to the dogs in those books. I love all three of the previous books, but I have friends who prefer a happier ending.

Wallace Wallace, the main character of No More Dead Dogs by Gordon Korman, tells his English teacher just what he thinks of the book (Old Shep, My Pal) that they read in class. He writes in his review of the book, "Old Shep, My Pal by Zack Paris is the most boring book I've read in my entire life. I did not have a favorite character. I hated everybody equally. The most interesting part came on the last page where it said "The End." This book couldn't be any lousier if it came with a letter bomb. I would not recommend it to my worst enemy" (4).

"I wasn’t surprised,” I said. “I knew Old Shep was going to die before I started page one.”

"Don’t be ridiculous," the teacher snapped. “How?”

I shrugged. “Because the dog always dies. Go to the library and pick out a book with an award sticker and a dog on the cover. Trust me, that dog is going down" (5).

Wallace's teacher, Mr. Fogleman is upset and sentences Wallace to after school detention until he writes a positive review. This means Wallace can't play on the football team, and his team is counting on him. His team mates want him to lie and write a good review, but Wallace can't lie. His father lied about everything, and Wallace always tells the truth even if the truth hurts.

He stays in detention for weeks making him an unwitting player in the school play, but someone is trying to sabotage the play. Is it Wallace? Is it an angry football player?

This story is told from multiple points of view, is fast paced, and fun just like I expect from Gordon Korman. Published in 2000, the Lexile is 610 and the characters are middle school students. They seem older and more sophisticated than they should, but the story is fun enough to overlook that fact.

If you are sick of books where the dog always dies, you will like this one with its surprise ending. Korman kept me guessing right up to the very end. 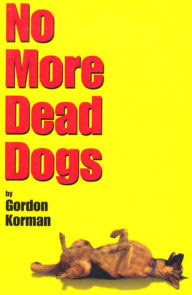