Do you have someone in your life who cannot take anything seriously - everything is a joke to them? Or are you someone who laughs about everything?

Sometimes it is okay to joke, but sometimes we need those around us to be serious.

Gary W. Boone, the main character in Louis Sachar's Dogs Don't Tell Jokes, wants more than anything to be a stand-up comic. He signs up for the school talent show, but he finds that everyone around him is sick and tired of his constant joking around. He only has one friend and she has moved to a different school. When it seems that the joke will be on Gary, can he turn things around?

In this story, Gary learns a lot about himself and he sees how annoying he is when he can never take anything seriously. Gary shows bravery, courage, and creativity in discovering himself. If you've ever felt like the odd man out or just an incredibly misfit teen, you will relate to this book.

Gary has a pretty amazing imaginary friend. He also has real life people who care about him.

Read more about Louis Sachar's work at his website by clicking here. 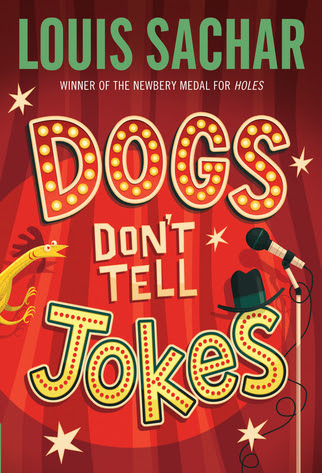 Blurb from the website: Gary W. Boone knows he was born to be a stand-up comedian. It’s the rest of the kids in his class who think he’s just a goon. Then the Floyd Hicks Junior High School Talent Show is announced, and he starts practicing his routine nonstop to get it just right. Gary’s sure this will be his big break—he’ll make everyone laugh and win the $100 prize. But when an outrageous surprise threatens to turn his debut into a disaster, it looks as if the biggest joke of all may be on Gary himself.