Through My Eyes by Ruby Bridges

If you are looking for an interesting non-fiction book to add to your library, Through My Eyes by Ruby Bridges tells about her story of integration as the only black child in her elementary school. 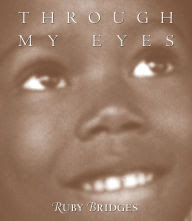 This large picture book sized slim volume is filled with photographs of what Ruby faced. The pictures and words made me cry. How could people be so full of hate to threaten a beautiful little girl? She was so tiny. Their rage and anger was unjustified, and it made me feel angry toward them.

I loved the words from John Steinbeck that were included: "The show opened on time. Sound of sirens. Motorcycle cops. Then two big black cars filled with big men in blond felt hats pulled up in front of the school. The crowd seemed to hold its breath. Four big marshals got out of each car and from somewhere in the automobiles they extracted the littlest Negro girl you even saw, dressed in shining starchy white, with new white shoes on feet so little they were almost round."

He continues,"The big marshals stood her on the curb and a jangle of jeering shrieks went up from behind the barricades. The little girl did not look at the howling crowd, but from the side the whites of her eyes showed like those of a frightened fawn. The men turned her around like a doll, and then the strange procession moved up the broad walk toward the school, and the child was even more a mite because the men were so big. Then the girl made a curious hop, and I think I know what it was. I think in her whole life she had not gone ten steps without skipping, but now in the middle of the her fist skip, the weight bore her down and her little round feet took measured, reluctant steps between the tall guards. Slowly they climbed the steps and entered the school" (25).

When Norman Rockwell read Steinbeck's words, he was inspired to create this image:

This book  gives the reader a sense of what it was like for Ruby and for the other children who were brave enough to go to school with her.

I wish that hate in our world could end. Ruby's voice of courage and hope shines through in this book.