Malala's Magic Pencil  written by Malala Yousafzai and illustrated by Kerascoet was published in 2017. Yes, this is the same Malala who was shot by the Taliban for advocating for girls to be educated.

I wondered how she would handle the scary, graphic nature of what happened to her, as this is her story told for a young audience, but she does a good job.

She tells about a show she used to watch where a boy had a magic pencil and how she wished she had one. She tells about what she would change in the world with her magic pencil. She tells about how she spoke out for other girls, and when she gets to the part where she was shot, she says, "My voice became so powerful that the dangerous men tried to silence me. But they failed."

The illustrations are well done and use color to convey mood and tone. Kerascoet is actually a pseudonym for two people: a husband and wife team, Sebastien Cosset and Marie Pommepuy. I love the pictures of Malala drawing things with her magic pencil. I think children will appreciate the magic of the story along with the reality that Malala used a real pencil and real words along with a whole lot of courage to help change the world. 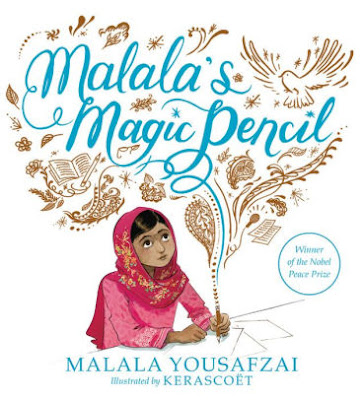