The Light Between Oceans

After reading a lot of good things about The Light Between Oceans by M. L. Stedman, I finally read it. This book is historical fiction, is set right after WWI, and was published in 2012. I hadn't read about the story line, so I was completely surprised at the twist and turns in this novel.

Stedman is a good storyteller who at times made me want to throw the book across the room because I was so frustrated by Isabel's choices.

After surviving WWI, Tom becomes a lighthouse keeper on Janus island on the coast of Australia. His wife has two miscarriages and then a stillborn baby boy. She is devastated, but when the tides carry in  a small boat with a dead man and a baby on board, she convinces Tom to put off reporting the baby or the dead man for a few days. Tom feels uneasy about this choice, but he loves Isabel and does as she insists. Isabel feels the baby is a gift from God to make up for her three lost babies.

If you haven't yet read The Light Between Oceans, stop reading this review now because there are some veiled spoilers ahead; however, this is a good book worth reading. 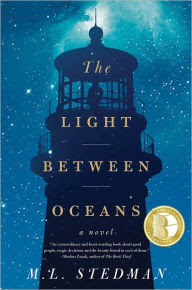 However, their decision to keep Lucy creates a web that very nearly strangles everyone involved.

The love story between Tom and Isabel is sweet and easy. I can understand her grief and near craziness after the stillbirth of their son, but I have to admit, I really started to hate her when she refused to do the right thing by the baby. Yes, she was worried the baby would go to an orphan asylum; yes, she was overcome by grief and want, but I agreed with Tom and wish he would have done the right thing anyway.

Hannah went through so much, and though angry, she reminded me of the mother from King Solomon, the one willing to give up her baby in order to save it. I was so angry at how the town treated Frank, and the fact that no one in the town ever called the mob to justice for his death. I loved Septimus Potts and how he helped Little Grace.

I worried so much for Tom's future. I can't believe the anxiety Stedman built in me for him.

Ralph was such a good friend to Tom. I loved his character.

"I've learned the hard way that to have any kind of future you've got to give up hope of ever changing your past" (332). This is so true. We torture ourselves with what ifs and if onlys that we forget to keep moving forward. We can't change the past, only learn from it and try to have a better future. The book also shows that our choices affect more than just us.

This book is worth the read. It was written for adults. There are only one or two swear words (sorry if there are more. They didn't stand out to me). The love scenes are not explicit, so even your grandma could read this book.  I gave it four out of five stars.
Posted by Catherine1216 at 1:55 PM