If you've read The Face on the Milk Carton, you know that Caroline B. Cooney writes a compelling story that keeps you turning pages. Published in 2005, Code Orange refers to the terrorist color levels that started after 9/11.

Blurb from the back of the book:

Walking around New York City was what Mitty Blake did best. He loved the city, and even after 9/11, he always felt safe. Mitty was a carefree guy–he didn’t worry about terrorists or blackouts or grades or anything, which is why he was late getting started on his Advanced Bio report.
Mitty does feel a little pressure to hand something in–if he doesn’t, he’ll be switched out of Advanced Bio, which would be unfortunate since Olivia’s in Advanced Bio. So he considers it good luck when he finds some old medical books in his family’s weekend house that focus on something he could write about. But when he discovers an old envelope with two scabs in one of the books, the report is no longer about the grade–it’s about life and death. His own.
This edge-of-your-seat thriller will leave you breathless. 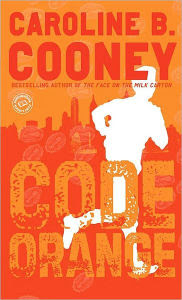 What the blurb doesn't say is that the scabs are from a small-pox patient. Mitty handles them, one falls into dust, and he breathes it in. Each chapter ends with the reader wondering if he will get sick and if small-pox will be reintroduced into our world. From page 14: "Scab particles were in Mitty Blake's fingerprints, He had wiped them on his cheek and rubbed them against his nose. He had breathed them in. Every virus, although not quite alive, nevertheless has a shelf life. The shelf life of some viruses is known; the shelf life of others is uncertain. In this case, it was the shelf life of Mitchell John Blake that was uncertain."

This book also asks the question of what would be the right thing to do if you were Mitty? If he ends his life before he gets sick, the disease ends with him. He loves his country, his family, and his friends, but is he strong enough to do the right thing, and what exactly is the right thing?

Read to a child today even if that child is you. :)